Study trip that occurred in France for a Chinese delegation

This study trip was supported by the FIPEC trade union connected to the MEDEF, which Cromology is a member via the SIPEV, National industrial trade union of paints, coatings and polishes.

The delegation was composed of around thirty government representatives of Chinese districts, industrial producers of industrial or deco paints and raw materials suppliers. It came to visit the Boulogne store (92).The discussions with the team were highly productive, they revealed cultural, climatic and technical differences between France and China in the fields of deco paints and external thermal insulation. 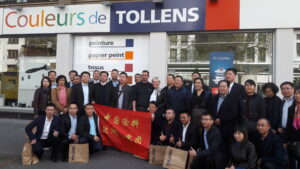 Wendel grants exclusivity to DuluxGroup for the sale of Cromology

Statement on a cyberattack at Cromology.